During the performance some participants spontaneously began to help the bear carry the table. Later I asked one of them the question below.

Why did you choose to help the bear carry the table?

I chose to help the bear carry the table because it seemed as though he really needed my assistance. At first in the street when I saw that the bear needed help with the table, I wasn’t sure if it was entirely genuine. Not in the sense that I thought the bear was being dishonest about something, but rather that he was testing the audience to see if we would help him.

I realized upon getting to the stairs that, he would really not be able to carry the table without help. He was really throwing himself out there. What if no one would have helped? What would we have done? Would we all just have stood there watching him struggle?

I think now we are so conditioned with performances not to “interfere,” since potentially anything and everything could be a part of the performance. There is a great fear of disruption. Of not going against the artists’ intentions, even though we as an audience are not privy to them. Despite that potential for distance or misunderstanding, something about this performance really activated the audience.

I felt connected to the other onlookers as it felt more like reverence, rather than attendance. Perhaps that is what he meant by séance after all: we were the body being called into presence. The spirit of the communal, some ghost of the common and the only foreign body, ourselves. 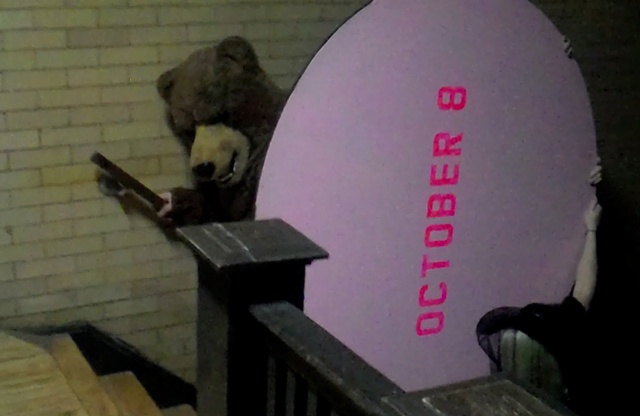 The participants help the Bear
< previous next >