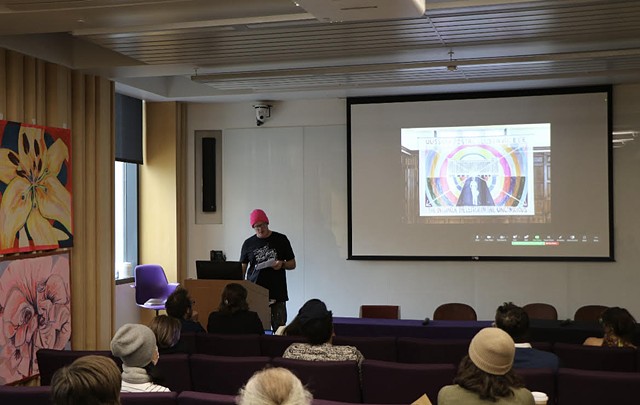 The lecture USSA@200bpm was given at Northwestern University on October 27th, 2022 for the conference Never Not In Crisis: Forms of Calamity in Catastrophic Times, Organized by Dr. Jacob Henry Leveton and Tamar Kharatishvili. Given in three parts, the lecture inaugurates the long-term project USSA CTA (Central Transit Authority). Photo by Elizabeth Upenieks.

Oh wow so happy to be here! ...Just barely made it on time... Can you believe this traffic? Me neither! Like I literally can’t believe twenty years after George W.Bush’s horrific oil grab and invasion of Iraq and numerous global protests against Big Oil

Everyone is still stuck in traffic... sitting on the Dan Ryan in some sort of pro-Putin Rally and turning up the thermostat while they do it

After decades of Earth Day rallies, we are all still supporting big auto... big auto controls our fate Our city space Our countryside Our health Our politicians The Death of Plants The Death of Animals We all thought our contemporary source of evil was big oil but the true villain has always been big auto!

As Paris Marx notes in his fantastic book, Road to Nowhere: What Silicon Valley Gets Wrong About The Future of Transportation.... Big auto murdered hundreds of thousands ...mostly children when they first hit the streets... yes, I say murdered because that's how it was initially reported but through massive ads campaigns and propaganda, the automobile industry normalized all the murder to the point where we now say, in acid-laced accusatory tones, "what were those kids doing in the streets in the first place?" when they get mowed down by drivers and call child services on bereft parents who turned their gaze away for two seconds

The problem of big auto is existential and don't be fooled by the century-old idea of the electric vehicle...they won’t save us either ...they just glamorize our guilty obsession ... our American Auto-identity is pathological

Look—— we have cleaned up all the horseshit, which admittedly at the turn of the last century was a serious issue, especially in New York City on a hot summer day but now the horseless carriage is antiquated It is no longer a viable transit solution but a world-ending problem

If we can put cellphone towers in every corner of the planet within a mere 15 years we can build, rebuild, and or retrofit bike-friendly pedestrian-oriented cities and phase out the horseless carriage on a similar timeline... I mean I know we can.

Isn’t that why we love going to Europe so much? For its promenades and car-free public spaces?

Cars are dumb. Full Stop. Seriously stop! We should all be embarrassed, no-- ashamed! to own an automobile in 2022

People will tell you today the world’s biggest problem is X (in fact I think I just did!)... X more often than not is the unfolding climate disaster aka global warming. Or, they may tell you it is the erosion of democracy and in the US the extreme polarization of society (notice how oddly that resonates with the first problem— polar) Perhaps it’s AI and the robot horde that will destroy all biological life as we know it

or maybe who knows... some people may think it has something to do with a little virus that has killed millions— millions! of human beings at a frantic pace (but you know, mostly old people or people with pre-existing conditions and they don’t really matter in fact they are kind of gross... get thee to the gym you old-infirm-weak-unmotivated-fatties and party on all you abled-bodied hipsters! So sexy in your blithe abandon of your fellow citizens! But I digress... (I do that often these days)

All of these nominations are valid-- smart-- and are surely correct in their assessment that they indeed are our biggest problems but I submit to you here today the biggest problem we are facing is in fact none of these... our biggest problem —the most difficult to surmount— to my mind is plain...it is simply: freaks and geeks or if you like: the revenge of the nerds

All of these men no matter their wealth and status will always be unliked, uncool and a total drag And They will never be cool THIS actually poses the gravest problem in our world today because these are men with tremendous wealth and power who have an equally tremendous chip on their shoulders, which they seem to have carried with all of their lives and it has built up a mass of resentment so titanic they are willing to let the world die for it...

they know Money and power can’t make them loved ...can't give them what they desperately crave... they know that girls don’t really like them and they would rather be talking with Barack Obama or Harry Styles and it drives them crazy... they know if they didn’t shovel loads of cash at people or threaten to kill them, no one would talk to them...

And it’s frustrating because so-called nerd culture is now in many respects dominant culture I refer you to the ubiquitous the Marvel Cinematic Universe...Some of this reversal of nerdum is good of course because being picked on for reading comics as a kid was not much fun i can assure you but it's also frustrating because being a cool kid is kind of everyone’s secret dream some people just have it... like they are actually cool ..like say maybe Ian F. Svenonious and those types of people just make you feel cool for hanging out with them like your older sibling's friend who sees you and makes you feel welcome and somehow makes you feel in on a secret...

Cool for these kinds of folks has never been about power or money... it was about sort of ease & authenticity coupled with an ethic of kindness to everyone. And that, i offer is our gravest problem today Pt 3: Notes on Emotionalism

There is something broken in me. For many years I could see it in my art and it bothered me, embarrassed me. I hoped no one could see it. It looked weak and awkward- not quite right. Now, I suppose I see that broken-ness as part of who I am and what I have to offer= my awkwardness.

It is why I think I try to “punch up” through my art when I can and why I am drawn to things people tend not to take seriously... juvenilia, cliches, the bureaucratic, boring stuff... all awkward and cringe-inducing in their own way and that’s where I want my art to live—In the land of the dismissible. If people don’t take something seriously maybe that’s where serious things can happen or come out of hiding and show themselves because the stakes are so seemingly low or maybe nonexistent...

My artistic enterprise wants to argue with anyone who cares to listen (probably those that don’t too) and say: you don’t think Unicorns matter but they do—I’m telling you, they do! or, that you may think a project about the postal service is dated and humdrum but I’d say maybe it is of the utmost political urgency to understand the mail because it has everything to do with human connection...

The art I make won’t solve your social problems and is often critical of institutions, corporations, and administrative bodies that use the work of artists to alibi it’s forfeiting of responsibility and defunding of infrastructure that serves the greater good.

The work is staunchly contrarian and asks you to think again (or at least once!) There could be people that may look at my work and think it looks messy or slapdash, but they would be wrong to think that... it has taken many years—decades really— to make work that looks like that... I want it to feel fresh and vital as if it’s becoming right in front of you, perpetually! When I was an undergrad I took a course in Japanese art history and that was when I first learned about the aesthetic concept of Wabi and Sabi...I don’t think about that concept all the time when I make work and I suppose thinking about it might be contrary to what it is...so I try not to think about it or anything else actually when I’m making my art... if anything, I think when I’m not making art... and the art making, the time in the studio is very dreamlike... I usually stop working on something the way one wakes up from a dream... maybe that sounds like an awfully romantic approach to art but that’s me I guess= 21st Century Romantic Goofball Conceptualist.

my art is a little lonely and sad because I feel that when you stop to think about it for a second that’s what the world is like and maybe because the world is like that I also am ecstatic and want my art to dance and scream and let you know that I want to dance and scream with you ... that for a moment with a little luck and cunning we can stave off the pain of loneliness and feel the comfort in knowing our shared broken-ness I don’t care if some people don’t feel that way about life. My work isn’t really for them anyways (Well, at least not yet, but it will be)

Does this artist's statement sound a little negative or defensive? I guess it probably does... maybe giving a statement about one’s own artwork feels legalistic to me, like testimony... but maybe to exhibit work is in a sense always to be put on trial in the court of public opinion ... folks often use words like “how to judge an artwork” and so on and so forth...

How could one not want to mount a decent defense of one’s own art practice in such a context; especially when the thing in public is a transmuted form of your inner world, filled with some stuff you know and lots, lots of other stuff to which you are completely oblivious to; which is maybe why you pushed the thing into public view in the first place... to find out!

The parodically over-cited but nevertheless still interesting artist Marcel Duchamp famously said “the viewer completes the work” and maybe what I call “finding out” is a bit like that... and that feels like a worthwhile lifelong endeavor to me.

ps. When you make art like I do... emotional art ... emotionalist... people sometimes ask me half-jokingly or not half but full ask you: are you alright? It’s an interesting question... the folks that tend to ask me this associate the emotions with my real-time biography and psychic state... of course, one must place one's self in such a state or be in such a state to produce the work but it’s always been beside the point to me as an artist... I am just a stand-in ... making an example of myself for others to see ... it’s intentionally TMI... and it’s theoretically through oversharing on the behalf of someone that can’t for whatever reason even share a little of what they are going through that I make my work ....so maybe they might not feel so alone in the burden they carry because my guess is that they aren’t that on some level everyone around them is with them in this... our all too often secret struggle ...

loss binds us all.

With thanks to Theaster Gates