with Robert Bird, Professor in the Department of Slavic Languages and Literatures at the University of Chicago; Dave Bernier, the general curator of the Lincoln Park Zoo ; Philp von Zweck, painter and artist; Lanny Silverman, chief curator at the Chicago Cultural Center, and moderator Zachary Cahill.

What is the state of the bear? In which State is the bear? How is the bear doing? What is the bear thinking? Where has it been? And, more importantly, where is the bear going? Without exaggeration one can safely say these are the most urgent questions facing us today. For the bear is not an empty signifier, but is rather a very particular and ancient creature flooded with meaning and those flood waters show no sign of abating. So, we convene this symposium as a means of gauging the rising “Bear-tide” before it overflows its banks. Gathering speakers who possess an array of connections with this fierce and lovable beast “The State of the Bear” will grapple with these and other pressing questions that speak to the bear- an animal that has a special significance to the great city of Chicago.

Dave Bernier is the general curator of the Lincoln Park Zoo in Chicago, IL. He has worked at the zoo since 1989, serving as an animal keeper, lead animal keeper for small mammals and reptiles and great apes, zoological manager of the bird department and curator of large mammals, carnivores, hoofstock and the farm in the zoo. He is the co-chair of the Lincoln Park Zoo’s safety committee and is responsible for conducting zoo-wide safety drills. Dave is one of the staff members at the zoo that can assume the roles of emergency coordinator or information office during any emergencies at the zoo. These positions are responsible for the execution of the emergency plan, overseeing the safe resolution of the emergency and liaison functions with police and fire scene commanders. He is a certified rifle instructor and head of the zoo’s firearm team. He is the coordinator for two North American Species Survival Plan programs through the Association of Zoos and Aquariums: southern three-banded armadillo and Sichuan takin. Dave has a bachelor’s degree in biology from North Park College and a master’s in business with an emphasis on nonprofit management from North Park University. Robert Bird is Associate Professor, The University of Chicago, Department of Slavic Languages and Literatures and the College. Associate Faculty at the Divinity School, Resource Faculty for Cinema and Media Studies, Medieval Studies, and the Program in Poetry and Poetics . His main area of interest is the aesthetic practice and theory of Russian modernism. His first full-length book Russian Prospero (2006) is a comprehensive study of the poetry and thought of Viacheslav Ivanov. He is also the author of two books on the film-maker Andrei Tarkovsky, Andrei Rublev(2004) and Andrei Tarkovsky: Elements of Cinema (2008). His translations of Russian religious thought include On Spiritual Unity: A Slavophile Reader(1998) and Viacheslav Ivanov's Selected Essays (2001). His biography of Fyodor Dostoevsky is forthcoming from Reaktion Books in their series Critical Lives. Lanny Silverman as Curator of Exhibitions for the Chicago Department of Cultural Affairs at the Chicago Cultural Center since March, 1990 I have curated over 100 exhibitions, most notably Sowers of Myth (1991); Michiko Itatani: Paintings Since 1984 (1992); The Nature of the Machine (1993); ConTextual: Art & Text In Chicago (2001); Leon Golub: Works Since 1947 (2003); Nick Cave: Soundsuits (2006); Karl Wirsum: Winsome Works(some) (2007);William Conger: Paintings 1958-2008 (2009); and Diane Simpson: Sculpture + Drawings, 1978-2009 (2010). These selected exhibitions were all accompanied by catalogs which I produced and edited and included my introductory essays as well as several by well known scholars. In addition I have assisted with world music, performance art and film programming at the Cultural Center, presenting such programs as the Royal Lao Orchestra (its first general public performance) and Korean sinawi (shamanist) music from Seoul, Korea, performances by Michael Meyers and Jaap Blank and several film programs including a rare presentation of Louis Malle's long out of distribution documentary, Phantom India. Philip von Zweck is a painter and artist who lives and works in Chicago, Illinois. Recent projects include two-person exhibitions with Andreas Fischer at HungryMan Gallery, San Francisco and Important Projects, Oakland. Solo exhibitions and projects include Performa 11 at INVISIBLE-EXPORTS, New York; NADA Hudson/INVISIBLE-EXPORTS; The Museum of Contemporary Art Chicago; 65GRAND, Chicago; Gallery 400, Chicago; three-walls, Chicago; and Medicine Cabinet, Chicago. He received his MFA from UIC and BFA from SAIC. He hosted and produced the weekly radio show Something Else on WLUW from 1995-2010 and ran the living room gallery VONZWECK from 2005-2008. Currently he is Founding President and C.E.O. of Thornberry, producer of the world’s finest door stops; and will have a solo show at 65GRAND in October. 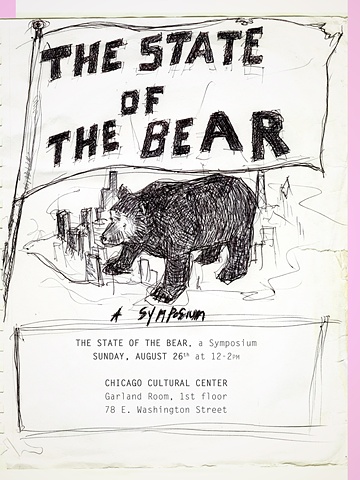